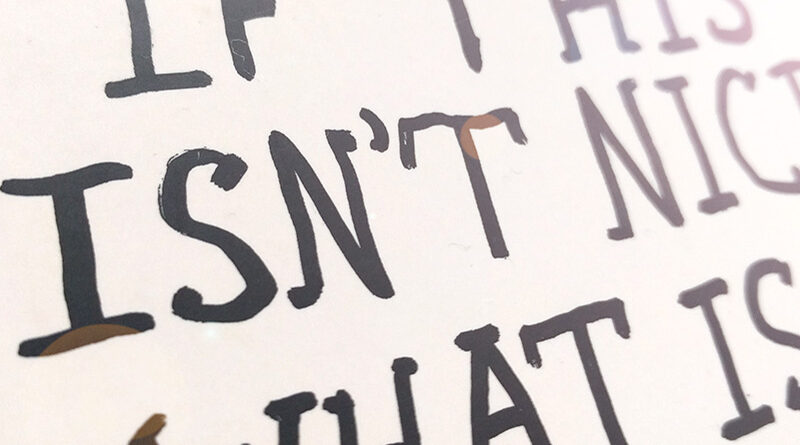 A dose of Vonnegut always helps me when the world seems a bit absurd. One sentence struck a chord with me.

Kurt Vonnegut (1922-2007) is one of those authors I return to again and again. There is calm humour in his work that seems to either make sense and makes it okay not to make sense. At certain times when world feels a bit too absurd good ol’ Kurt is my antidote.

His wit and dry humour always manages to take the edge off that gloomy feeling. To sum it up: Humans aren’t too bright in the grander scheme of things, but you should go with the flow and enjoy life anyway. He famously wrote several times in his most well-known book “Slaugherhouse-Five”:

In other words: That’s just how it is. He wrote plenty of books, but also a great many essays, letters and speeches. Among them speeches for university graduations. A selection of these wonderful nuggets of wisdom was published in 2014 in the book “If this isn’t nice, what is?” (which had the tagline “advice for the young”). The title itself is a beautiful reminder to take a break once in a while, look around and count your blessings.

In his 2001 graduation speech delivered at Rice University in Houston, Texas, he shared an encounter he had:

He’s Joe Heller, author, as you know, of Catch-22. We were at a party thrown by a multi-billionaire out on Long Island, and I said, “Joe, how does it make you feel to realize that only yesterday our host probably made more money than Catch-22, one of the most popular books of all time, has grossed worldwide over the past forty years?”
Joe said to me, “I have something he can never have.”
I said, “What’s that, Joe?”
And he said, “The knowledge that I’ve got enough.”

Beautiful in all its simplicity. It can nevertheless be a tricky exercise considering we are told 24/7 (especially by advertising) that we never have enough and we are inadequate. I try to find ways to make the “I’ve got enough” mantra stick. I think I’ll be returning to this topic in various ways in coming blog posts.

I guess another reason I like the quote is I’m a sucker for anything that can “stick it to the man”.

This text originally written for Easy Being Free, June 2, 2018.